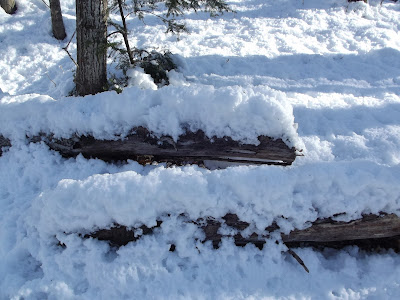 Winter has arrived. Yesterday, we got about 8" of wet snow.  Today, the temperature has dropped to about -10C and the snow is crunchy.  The surface is pitted because the snow on the trees fell off when the snow was still soft. 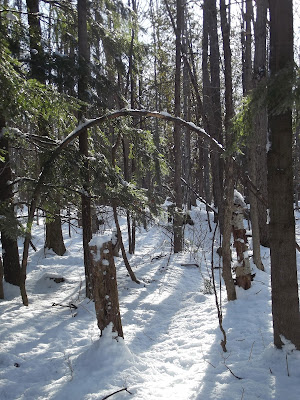 Time for a quick walk in the bush.  I thought trees were supposed to be vertical... 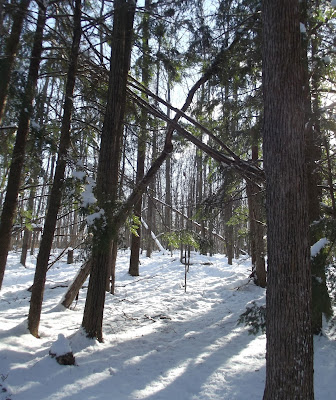 As I walked around, I kept finding trees making shapes, 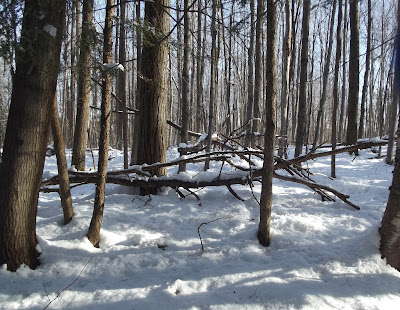 and designs.  The snow highlights the branches. 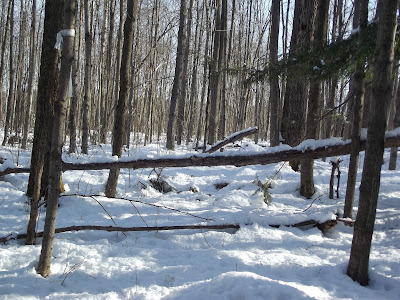 A naturally made rail fence. 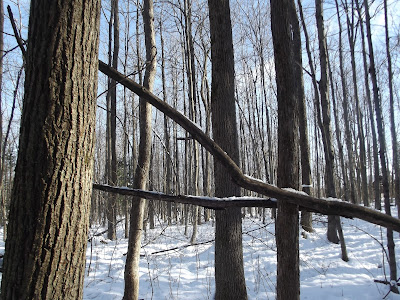 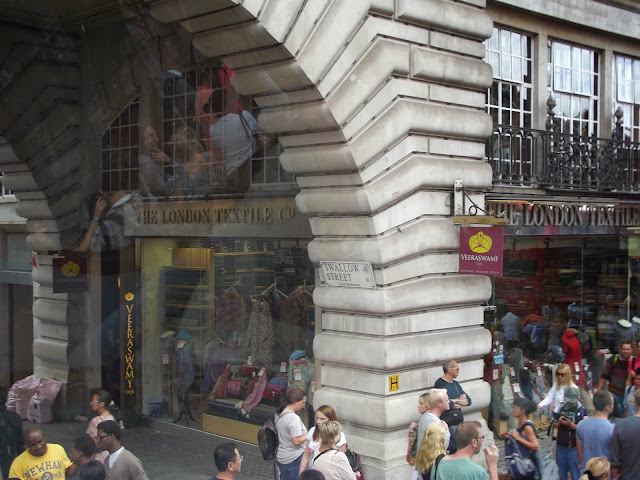 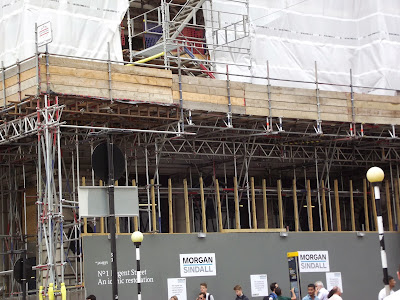 Lots of restoration going on everywhere .  Not too pretty when the work is being done, but what a great investment in the future. 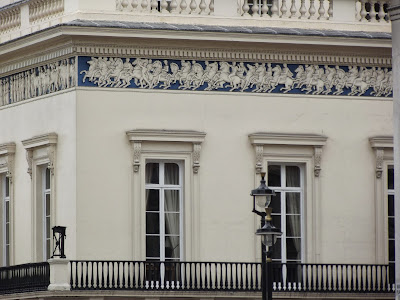 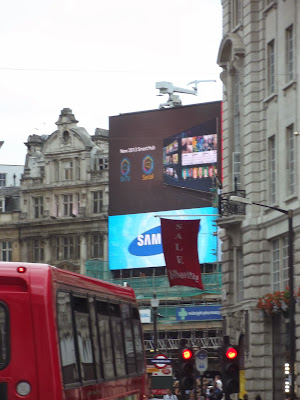 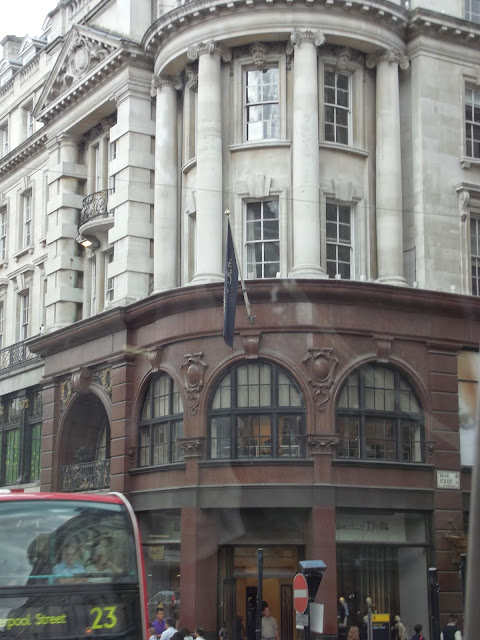 A rock-steady business with its solid brown base. 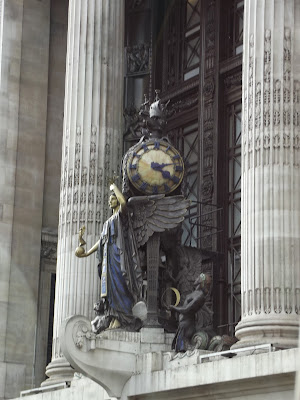 Ornament at Selfridges.
Posted by Jenny at 2:29 PM 2 comments: 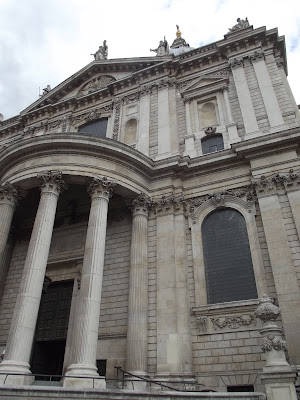 It's another rainy day here so time to go back to London.  This is not the traditional view of St. Paul's Cathedral (check out Wiki for a classic view), but I think it gives a good idea of just how tall the building is.  Look up, look way up, and you will see the top of the dome.  It reaches up 365' (111m), and when you have climbed up to the top you really know that it's a tall, tall building.  A sign at the bottom of the inside stairs to the dome warns that people with heart conditions, pregnant women and claustrophobics should not attempt the climb.  Claustrophobics?  Oh, yes.  The upper staircases are very narrow, steep and sharply curved.  I had to stop periodically as I started getting a bit dizzy from all the turning.  It is also becomes a one-way venture when the stairway becomes too narrow for two-way traffic.  Once you proceed higher than the Whispering Gallery (the base of the dome), you have to continue to the top before you can come down.
Wonderful view at the top.  Well worth the challenging climb. 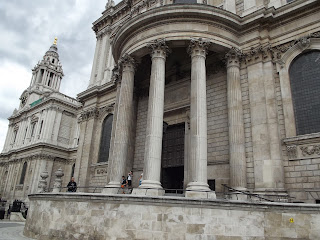 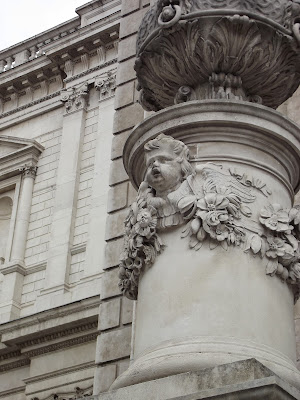 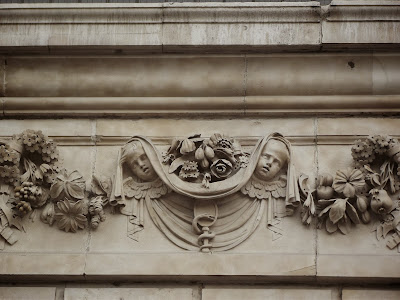 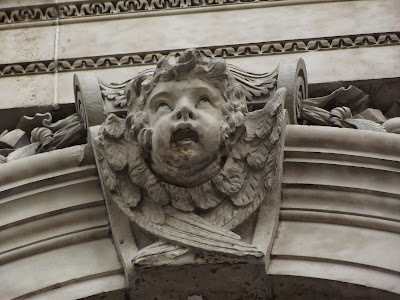 Lots of cherubs and flowers which are quite a contrast to the bold pillars, and overall rectangular shapes. 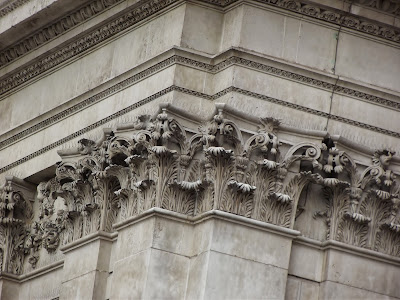 Somebody in London enjoyed doing those curled, leafy carvings.  They keep cropping up. 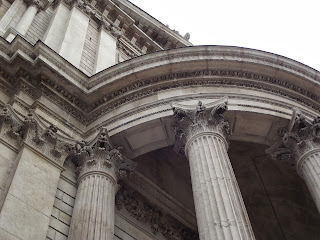 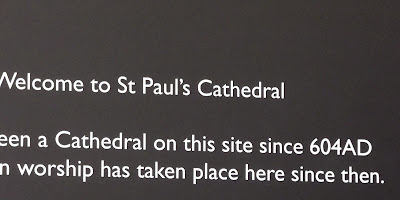 604AD.
People have been praying here since 604AD.  Wow! This building dates from the late 1700s.
We arrived at the Cathedral around noon, and were able to participate in a service.  The cathedral is the seat of the Anglican bishop of London so it was a regular Anglican communion service.  I really liked the way they set it up.  An area was roped off to delineate where the seating area for the service would be, but the service wasn't cut off from the tourists milling around inside the cathedral.  The tourists and the worshipers were happily sharing this amazing space.
No photographs allowed to be taken inside the cathedral but there are lots of good pictures online.
Absolutely worth a visit, either in person or via the Internet.
Posted by Jenny at 1:14 PM 2 comments: 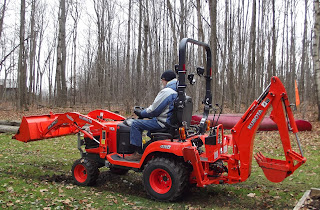 I am not someone who likes machines or motorized whatevers.  I would rather sweep with a broom than vacuum, stir cookie dough by hand rather than use a mixer (don't actually  have a mixer), add numbers with a pencil rather than use a calculator, screw in a screw with a screwdriver rather than a drill.But I am thrilled with our new little tractor, especially with the loader and the backhoe.
I was so surprised that I enjoyed working the backhoe so much.  It is strangely soothing to use the hydraulic levers to manipulate it.  Who would have thought?!  Certainly not me.
My husband, who is on the tractor, is good with things that go so I expected him to like it, but I have never felt so pleased to work with a machine as I have with this little orange tractor.
We got the tractor primarily to deal with the snow.  In fact, today the tractor man came and removed
the loader and backhoe and put a snowblower on the front. We are anxiously awaiting the first snow
fall ,which could be next week or not for several weeks, so we can try out the snowblower.
We will find all kinds of excuses next summer to move dirt around and to dig random holes, I'm sure.  I could even use the backhoe to dig up perennials if I want to move them.
Posted by Jenny at 6:29 PM 2 comments: 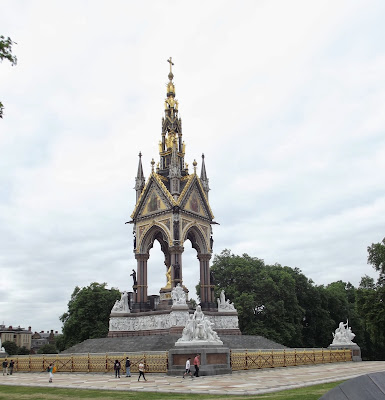 It's a dreary November day today, but then Remembrance Day always is.  I guess it is fitting that it should be so.

Here are some more London photos.  The Albert Memorial, built by Queen Victoria in memory of her husband Albert,  is at the southern edge of Kensington Gardens.  From a distance, it didn't strike me as very remarkable, and I found the design a bit odd with the peaked roof looking too big for the rest of it. 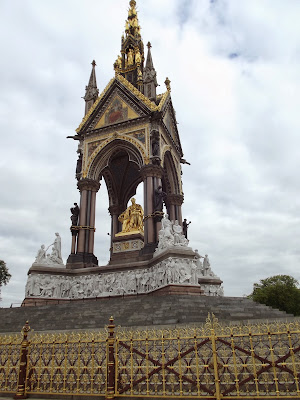 When I got close to it though, I liked it better as the proportions change when you are near it.
Although it is a memorial to Albert, it has a lot to say about Queen Victoria herself and about her people throughout the empire.  The carved band depicts some of the significant  creative people of the empire:
Writers, musicians, painters, sculptures, etc.
On the inner four corners carved in white marble, are representations
of  the four major areas of enterprise: agriculture, engineering, commerce, and manufacturing. 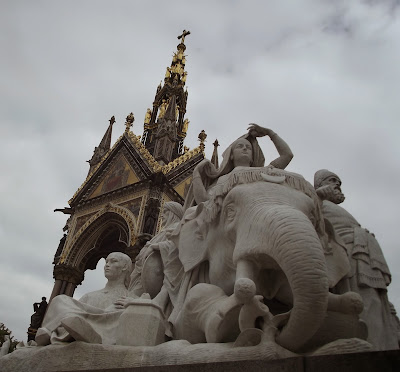 The sculptures on the outer corners represent the continents of the empire.  Each group includes an animal symbolic of the continent:  Africa - camel,  Asia -elephant,  America -Bison, and Europe -Bull.  The sculptures are all beautifully done .  The people and animals all look outward.  That seems very apt as Victoria was certainly someone who had a big view of things. 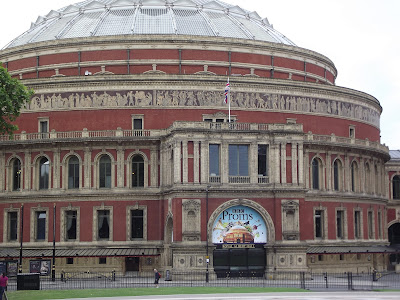 Across the road from the Albert Memorial is the Royal Albert Hall. It was built in 1871 and originally had a seating capacity of 8,000, but today's regulations only allow for about 5,000 people.
It is used for all sorts of concerts and fundraisers.  When it was first built, the acoustics weren't good and performers were challenged with echoes.  Over the years, improvements have been made to solve the acoustical problems. 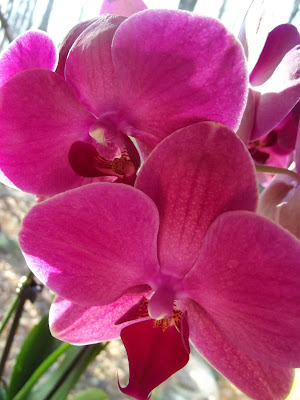 Years ago, orchids were considered very exotic, expensive and hard to grow, but in the last few years Phalaenopsis orchids have become readily available in the plant section at the grocery store. 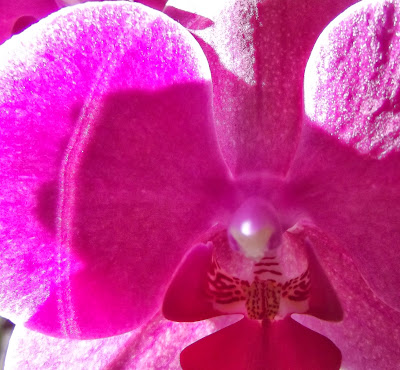 They are a bit tricky to keep going over the long term , but they will  bloom for weeks after you buy them with not too much trouble. That's a real treat at this time of year. 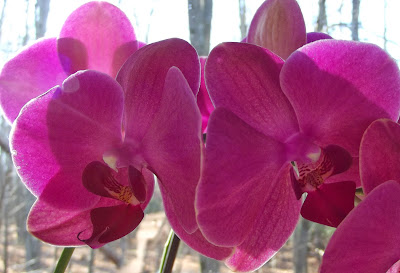 I water with rainwater as they don't like hard water from a well. 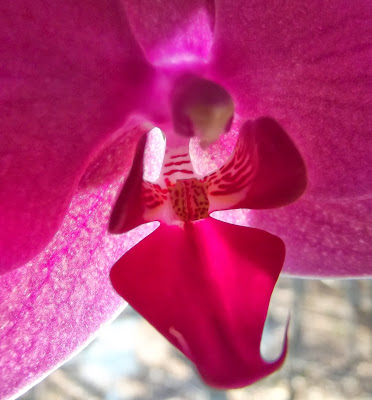 Lovely markings and shapes.
Posted by Jenny at 6:41 AM 3 comments: 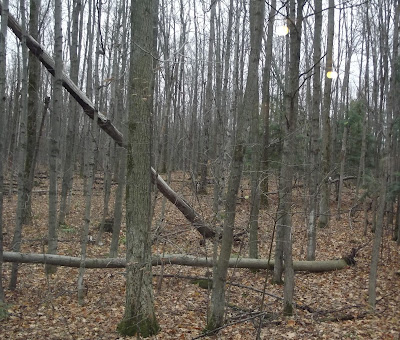 Living in a house surrounded by trees is very pleasant, but, on a windy day like today, rather hazardous .  These two trees fell down this afternoon.  The nearer one about twenty feet from the house, the farther one about thirty feet.  It's good when they fall completely to the ground and more dangerous when they get hung up on another tree.
It is an ongoing challenge trying to find someone to cut down the dead trees before they fall down.  Not that many people are interested in cutting firewood any more, and those that are have no shortage of people wanting their services. We think we have someone lined up for this fall, but time will tell if he will actually get to our property.