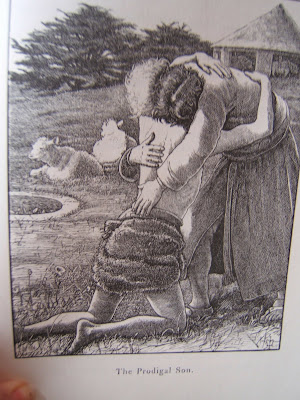 My Version of the Prodigal Son

Once there was a son of a wealthy farmer. He was a healthy young man, full of vim and vigour, intelligent and adventurous. After all, he had always been well-nourished and taken care of. He had never known abuse or any real danger. As he approached manhood, he became restless. His father seemed stodgy and boring, careful in his farming, and not very exciting. He was loving and kind, but sometimes his son found his concern for him rather smothering.

So the son demanded his inheritance money and went off on his own leaving behing his father's outdated, quaint, but foolish ideas. The son was going to have FUN, to really LIVE, to take the world by storm. It would be a blast.

When the son left, the father's heart was heavy and aching. He missed his son right from the start , and he also knew that what his son was chasing after would only lead to unhappiness. Every day the father longed for his son to return.

Meanwhile, the son went on a tear. He laughed uproariously with his buddies, he flirted extravagantly with the girls, and tossed around exceedingly clever ideas. It was deliriously fun to be free, to be in charge, to make all his decisions by himself, for himself, to be king of his life.

But one day, it all changed. His money ran out, his friends disappeared. He realized that he'd never really cared for them, or they for him. Had he used the girls or had they used him? The booze left a nasty taste in his mouth and an even nastier mood in his brain. He felt so alone. And so week after week, he dragged around barely scrapping by, and growing more and more bitter.

One morning, he saw a herd of sheep being led down the road and suddenly he was overwhelmed with homesickness for his father's farm and, even more so, for his father. He felt so alone and lost. He couldn't afford to buy a donkey, but he determined to go home anyway on foot. As he walked mile after mile, memories of time spent with his father came as vignettes to his mind. He remembered his father's hand on his shoulder, his look of concern when the son was troubled, his big smile when he greeted him. And slowly a feeling of dread began to grow in the son's heart. How selfish he had been, how wasteful, how mean, how unlike his father. How could a father possibly want a son like him? Of course, he wouldn't want him anymore. And yet the son kept walking because he wanted so much to hear his father's voice even if it was angry, even if it would reject him. He wanted to see his father; he wanted to be near him. Perhaps he could hide when he got to the farm, and just peek at his father from his hiding place.

Back at the farm, the farmer had tried to put on a cheerful face for his family and workers, but his gaze would naturally turn towards the road, staring long into the distance trying to pick out the smallest dot that might be his son returning home. Finally one day, he saw a small shape in the distance. As he squinted to see better, he thought even from afar that he recognized a way of moving. Clutching his shepherd's crook so hard that his knuckles blanched, he stared not wanted to blink in case what he saw would disappear like a mirage. He began to feel dizzy, his breath almost stopped. But it was, it truly was his son, he knew it was his son! He dropped his staff, and gathered up his robe in his hands and ran, his sandals slapping on the hard ground, his eyes fixed on his son. As he got closer, he saw that his son's face was downcase and that he wouldn't see him coming. He tried to call out to him but his breath was all but exhausted. Finally just as they were about to meet, the son looked up. His face froze with fear when he saw his father, but his father just grabbed him in his arms and sobbed with relief.

And the son's heart melted into his father's love.
Posted by Jenny at 1:02 PM 1 comment: 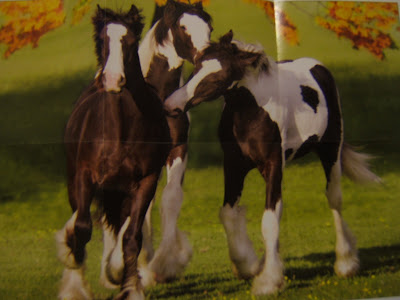 Often at Christmas, we get a jigsaw puzzle to work on over the holidays. This year I picked out one that had this beautiful picture of Gypsy Vanner horses on it. A poster of the picture was included with the puzzle which was a nice bonus. I really like the Gypsy horses with their feathery legs and round bodies. They are pretty much a scaled down version of a work horse but they have more energy and are suitable as riding as well as driving horses. They have only been available in North America for about 15 years but they have been used by the gypsies in Europe for a long time. They can be a solid colour but the black and white piebald colouring is particularly popular. The horses in this pic are yearlings and they are having fun, running and nipping at each other as they play.

I was given Susan Boyle's book, "The Woman Who I was Born to be" and I found it a great read. She is so down to earth and unpretentious. She has had her challenges along the way - she suffered some brain damage when she was born and as a result has some learning disabilities that made school and work difficult. She has loved music all her life and grew up in a musical family. When she was young, she had a big crush on Donny Osmond, and one of the special thrills of her new life was that she actually got to meet him. Her faith in God is very important to her and has been her refuge when life has been overwhelming. It sounds like she has been able to assemble a good group of people around her to support her new career, and she is excited to be getting professional singing lessons that are allowing her to improve her voice. I was also given her Christmas CD "The Gift" which has some really nice songs on it.
Posted by Jenny at 1:55 PM No comments: